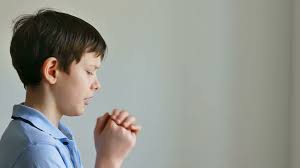 I am convinced that everyone prays. Even an atheist has a way of expressing their needs to someone or something other than themselves.  They too need help through difficult times.  There is something deep within every human being that cries out for help. When trouble comes our way or when someone we know is going through struggles, we reach out.  Major religions around the world each have their own view of what prayer should include.  There are also many ideas on how prayer should be delivered.  Some require a set schedule of prayer, while for others, it’s more a form of meditation.  Prayer is a vital element of the human soul.

I was raised in church.  My mom was the church secretary in a small congregational church in Massachusetts when we were growing up.  We had to be in church!  I sang in the children’s choir. Our family was involved in everything that went on at church. At 13, I was confirmed and started being a teacher’s helper in Sunday School.  A friend and I ran a small teen hangout in the church for a while. We were at church often.

We learned to pray at an early age.  Reciting our bedtime prayers and praying over meals were the two ways we practiced.  Unfortunately when I reached the rebellious age of 16, I wandered away from church and set out on a road of self-destruction.  Drugs, alcohol, sex, and parties were all that seemed to matter.  Church was ignored.  Even then, I can remember praying at certain times.  It is something that stuck with me even when I was away from God.  I wasn’t even sure at times who I was praying to.  I just knew I had to call out to something greater than myself.

I remember one instance where my group of friends and I were working on a car.  We were all far from God and full of trouble.  We were trying to get the transmission apart from the bell housing and one of the bolts just would not come out.  We all tried with no success.  None of us really believed in God and we never darkened a church door.  As a last hope, my friend Wayne made the statement, “OK, God.  If this bolt comes out, I will go to church this Sunday.”  He gave it another try and the bolt came out like it was never stuck.  I remember it like it happened yesterday.  Today I ask myself why that prayer was answered and so many others, from true Christians who love the Lord, seemingly go unanswered.  By the way, he did not go to church the next Sunday.

In 1976, I made a trip to Iowa.  We attended a service earlier in the week.  The preacher had me convinced I was going to hell, and I knew I did not want to go there!  The night before I was going to head home, my friend’s pastor came to his trailer.  There, in my best friend’s mobile home, I prayed the sinners’ prayer.  I asked Jesus to be my Lord and Savior.   I was saved that night.  Upon returning to Massachusetts, I started attending that same congregational church I grew up in.  Two years later, on a return trip to Iowa, I met my future wife and moved to Iowa in 1978.   We were married by year’s end.  Three children and five grandchildren have come along and we will soon be celebrating 40 years together.

This was a time when I really started to grow in the Lord and learn His ways.  I was focused on building a family and growing in the Lord.  Long hours were spent in prayer and in the Word.  Reading through the Bible several years in a row brought understanding.  Studying things I did not understand were all priorities of mine.  Seeking God for wisdom was at the top of my list during those years.  I became a worship leader in my small church.  Some lay ministry and prison outreach occurred.   I developed a prayer life, but I always sensed there was a lot more than I currently realized.

I had so many questions about prayer through these years of my walk with the Lord that I decided to study and learn for myself.  What is prayer?  When should we pray?  How should we pray?   Why should we pray?  How can we pray effectively?  In 1990, I earnestly sought the Lord with these questions and developed the basics for what I thought would eventfully be a book.  After finishing the study, it sat on a shelf at home.  I was busy raising a family and growing my career.  The book would not get done and the study was forgotten.

I was diagnosed with Multiple Myeloma Cancer in the spring of 2016.  My treatment included two stem cell transplants in the first six months.  The recovery was lengthy.  Maintenance chemo would continue for two years during which I slowly regained strength. In the winter of 2107-2018, the notes from this study were found in a house cleaning session.  I decided to take another look at what I had written out thirty years earlier.  I found dozens of scripture references, notes to myself, ideas I had forgotten about and a study just as relevant today as it ever was.

During my illness I felt directed to start a blog which would concentrate on Bible study.  After going through Philippians, Galatians, Psalms and James, the Lord put it on my heart to take this study and put it out on my blog.  Ideas and concepts were added that I had learned since the original study.  I was pleased it was so well received by my fellow bloggers.

The blog posts were gathered together and I realized that I now had the book from thirty years ago.   It amazes me how God can bring things about.  Had it not been for my illness, this book would not have happened.  It is my belief that God uses our worst circumstances to do amazing things in our lives.  This book is a prime example.  If I had not become sick and had such a long recovery time, I would have been too busy with career and other things to put this all together.  Because He gave me this time and directed me to put this book together, I believe the church will benefit greatly by the contents.

My desire is that together we can get a better understanding of the inner workings of prayer.  There are a lot of very familiar concepts and verses included.  There are also some things that God has allowed me to share with you that might be a little different than the way you have always understood prayer. By keeping an open mind, I believe we will all gain new insights into our prayer lives.